Principles of Self-assembly in Ants

In any system of interacting units, complex group-level properties emerge that are more than the sum of its parts, and we have little understanding of how this occurs. The self-assembled bridges and chains built by (and of) weaver ants (Oecophylla smaragdina) and army ants (Eciton hamatum and burchellii) are an example of how complex form can emerge from the interactions of many units, each using simple behavioural rules. This project combines animal behaviour and complex systems modelling to; a) uncover these rules; b) develop computer models to test their function, and; c) translate them into control algorithms for swarm robotics, proving their generality. This type of work could transform our understanding of many other complex systems, including finance (interacting economic firms), disease (tissue development, protein folding) and technology (autonomous vehicles, nano-assembly).

Army ants build a dynamic bridge structure to enhance the efficiency of their foraging trails;

Weaver ants build hanging chains to use as rope ladders, bridges as highways, and pulling chains as winches to haul leaves together to make their nests. 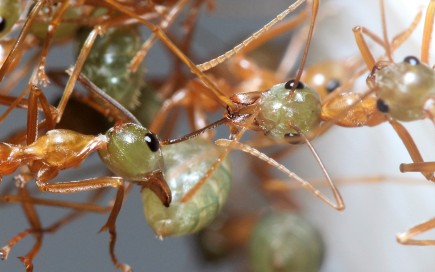 Weaver ants rolling an artificial leaf in the lab.

In nature, ants and slime moulds must find food, build structures, and navigate efficiently, but how do they solve these problems as a collective? In my PhD research, I challenged ant colonies with a difficult optimisation problem in the form of a maze, and refuted the previously held theory that mass-recruiting ants cannot adapt quickly to changes in their foraging environment. This work was the first to challenge ants with a truly difficult problem adapted from computer science – the maze contained over 30,000 possible solutions, and the ants reliably found the optimal solution. The study also provided the first experimental and theoretical evidence that ants use an internal spatial compass to collectively solve dynamic problems (Reid et al. 2011, J Exp Biol; Ramsch et al. 2012, J Theor Biol). I described a novel mechanism by which individuals sway the colony decision towards the best of many food sources (Reid et al. 2012, Anim Behav).

Slime moulds differ from ants in that they do not possess a brain or neurons to solve problems, but both are complex systems that share fundamental collective properties. By challenging the slime mould with the same maze provided to the ants, I showed that specific networking led to differing feedback strengths within each system, and performance differences (Reid & Beekman 2013, J Exp Biol). I discovered that slime moulds possess a spatial memory, encoded into the environment by a trail of slime. I showed that this memory system acts both as an aid to navigation in complex environments (Reid et al. 2012, PNAS) and as a patch-marking cue for slime moulds of the same or different species (Reid et al. 2013, Behav Ecol). This suite of studies has advanced the fields of bio-inspired computing, by augmenting the established problem-solving algorithms based on ant colonies and slime moulds with additional parameters that will enhance their effective use in human systems.

Slime mould solving the U-shaped trap navigation problem. To reach a well of attractive glucose, the cell muct navigate out of the U-shaped, plastic trap. It does this by laying a trail of slime to ‘remember’ where it has been:

With it’s memory disabled (by covering the substrate in slime trails), the cell loses it’s ability to navigate out of the trap effectively:

So how do slime mould’s make decisions with a brain? Using the Two-Armed Bandit problem (a common test for decision-making in brained animals), we showed that Physarum has some pretty impressive decision-making skills, reliably choosing the better of two options by direct comparison of their traits (rather than simply exceeding a quality threshold). Physarum could also discriminate between two options that closely rank in quality, and used not only the frequency at which rewards were encountered, but also the sum of the individual qualities of each of the rewards when choosing its option.

Considering my career is early-stage, my research contribution is substantial. My research has featured in both scientific media (Nature News, Nature Research Highlights, National Geographic, BBC Nature, Scientific American, ScienceNews, Journal of Experimental Biology Research Highlights), and popular media (ABCNEWS 24, Catalyst, Scope, COSMOS, Sydney Morning Herald, ABC Radio). Two of my papers (Reid et al. 2011, J Exp Biol; 2013 Behav Ecol) have been rated ‘Must Read’ by the Faculty of 1000. I am a Review Editorial Board Member for the journal ‘Frontiers in Behavioral and Evolutionary Ecology’, which is one of the leading journals in my discipline. The high standing of my research among my peers is evidenced by my >25 presentations (14 invited) at conferences, workshops and labs in Australia, Sweden, Japan, USA, Germany and the UK. Most of my presentations have taken place at leading conferences which form the main meetings for their fields, such as the International Society for Behavioural Ecology Conferences, the International Ethological Conferences, the International Union for the Study of Social Insects Congresses and the annual conferences of the Animal Behavior Society (USA).

My previous work as a biochemist for Johnson and Johnson Research in the private sector yielded an internationally recognised patent on which I am a named inventor. My contribution to the patent ‘Molecular Switches and Methods for their Use‘ consisted of a revolutionary new design for a molecular full adder – essentially a DNA-based computer.